Creating, managing, and removing viewsheds in your project.

In order to add a new viewshed to a segment, navigate to the segment you are working on and select the "Shade" section of that segment's menu on the left hand side of the screen. You can add your first viewshed by hitting the "Add Viewshed" button.

After hitting the "Add Viewshed" button, you will notice that a yellow line will follow the cursor within the 3D environment. This indicates that you are ready to place a viewshed.

When you have moved your cursor to the area where you would like to generate a viewshed, left click to place the viewshed.

You can place a viewshed manually anywhere on a segment to generate a Solar Access, TOF, and TSRF measurement as well as a viewshed trace and a horizon trace.

If you are adding more than 1 viewshed, you can hit 'Space' or 'Enter' after the first viewshed is placed to quickly add more viewsheds without having to hit the 'Add viewshed' button in the Scanifly interface.

You will see after placing a viewshed that there will be a numbered viewshed icon that will be left where you clicked to place the viewshed. 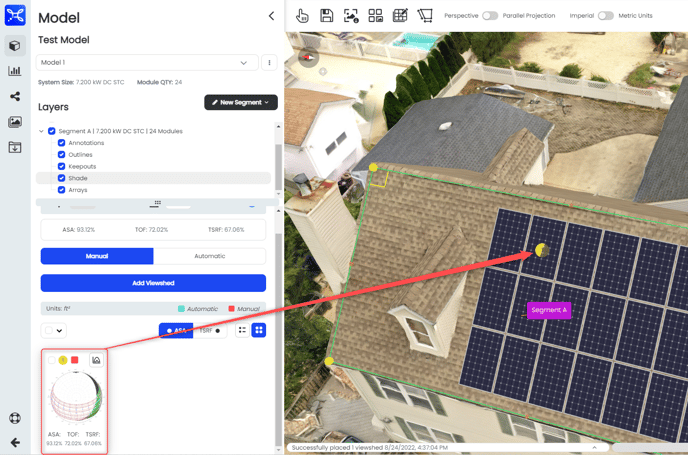 You are now ready to add more viewsheds on the roof surface. It is best to place viewsheds around your roof surface in order to properly estimate production based on site specific shading.

If you would like to place multiple viewsheds across a large and complex array surface, you can place viewsheds automatically by using the Automatic viewshed functionality.

Adjust the density of the viewsheds generated by clicking on the arrows in the left menu. 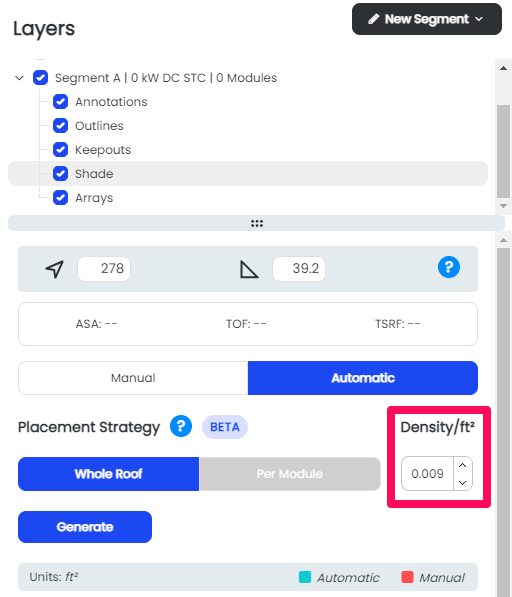 If there are a lot of shading obstructions on or near the roof, it is better to use a denser grid setting.

Once you have reached your desired grid density for your design scenario, hit the "Generate" button to load all of the viewsheds on your segment.

After generating viewsheds for your segment, you will notice that the entire segment will have an Annual Solar Access (ASA), Tilt and Orientation Factor (TOF) and Total Solar Resource Factor (TSRF) viewable in the Shade menu as well as the Segment menu.

If you would like to avoid viewsheds being placed outside of your system design, the "Per Module" auto-viewshed feature will place one viewshed in the center of each module in an array.

For Automatic Viewsheds Per Module

You will need to have modules on the segment in order to generate the viewsheds.

You can view all of the viewsheds and their corresponding ASA, TOF and TSRF values by hitting the List View button. From there you can individually access the Viewshed traces and generated horizon profiles for each viewshed. 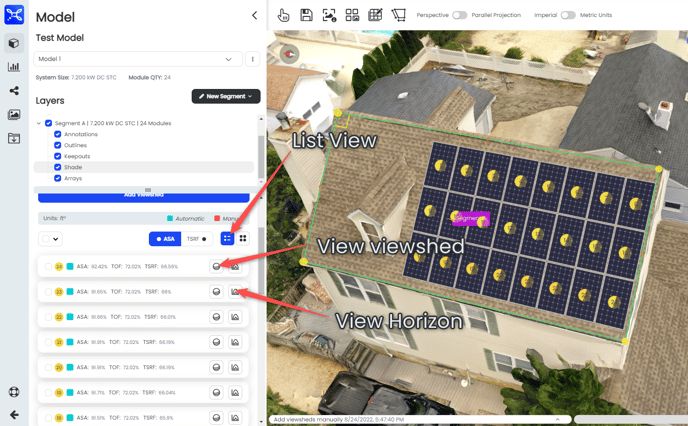 You can also view all of the viewsheds and their corresponding ASA, TOF and TSRF values by hitting the thumbnail button. From this, you will be able to view each viewshed trace without having to open them one by one. From there, you can individually access the generated horizon profiles for each viewshed. 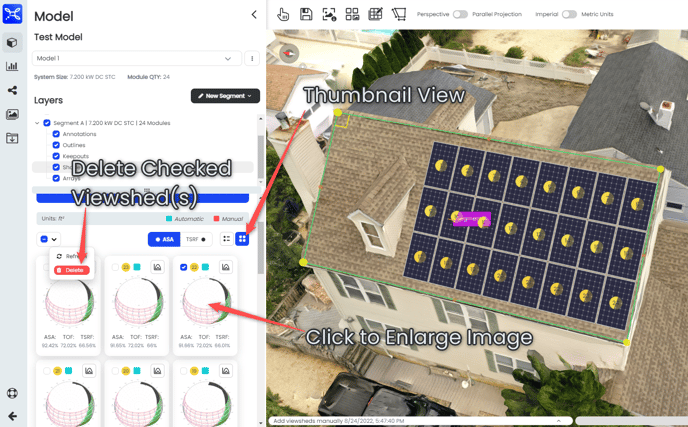 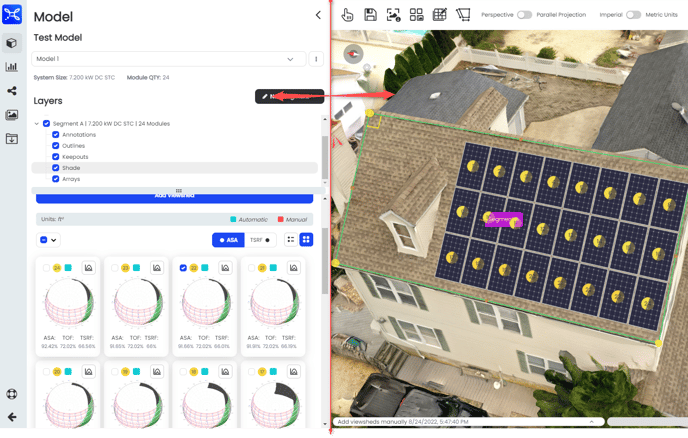 You can delete individual viewsheds by clicking on the check boxes next to each viewshed you wish to delete on the left side in the Shade menu, opening up the dropdown menu below Units, and selecting delete. 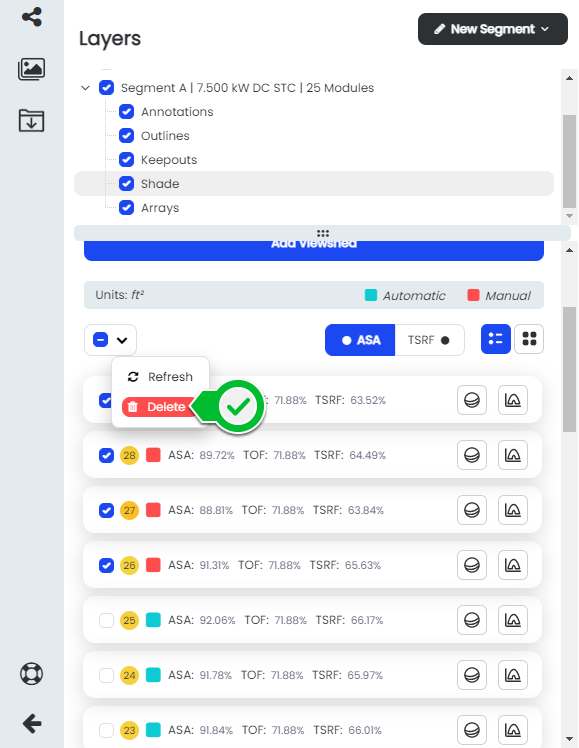 If you wish to delete all of your viewsheds, you can click on the checkbox next to the dropdown arrow, and select delete. You can tell that all viewsheds are selected by the checkmark that shows up within the checkbox instead of the dash. 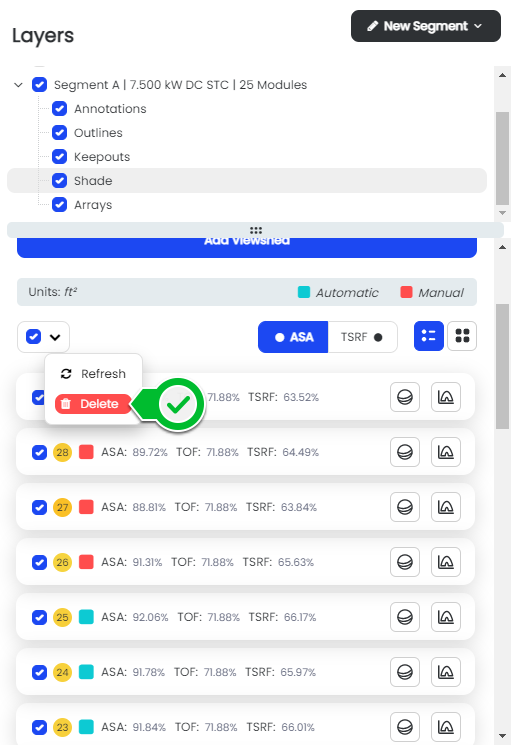