How Do You Fly Drones in DC Airspace?

Local, state, and federal governments have committed to renewable energy in their policies and procurements. Drones are becoming a big part of their strategy because they save up to 90% of time onsite and are safer than manual survey methods. Yet, there are certain areas where getting permission to fly a drone is complicated, such as around government buildings, military bases, and right next to airports. While these more nuanced airspaces exist throughout the United States, you can navigate them through the LAANC process. However, no airspace poses a bigger challenge than trying to fly drones around Washington, DC. It is possible, but difficult - here’s what you can do.

First things first: All drone flights are guided by the TSA regulations on Unmanned Aircraft Systems (UAS). You can fly a drone in the DC area, if you have government sponsorship for your project and permission to fly. But you need to know three critical things.

1. You can’t fly in the no-drone zone

Ever since a drone crashed on the White House lawn in 2015, a 7-mile radius around DC got set up and deemed a “no drone zone.” Generally speaking, there is no way to fly a commercial drone in this airspace, regardless of permission or type of project. Simply stated, a commercial or hobby drone will not be allowed to take off in this airspace. 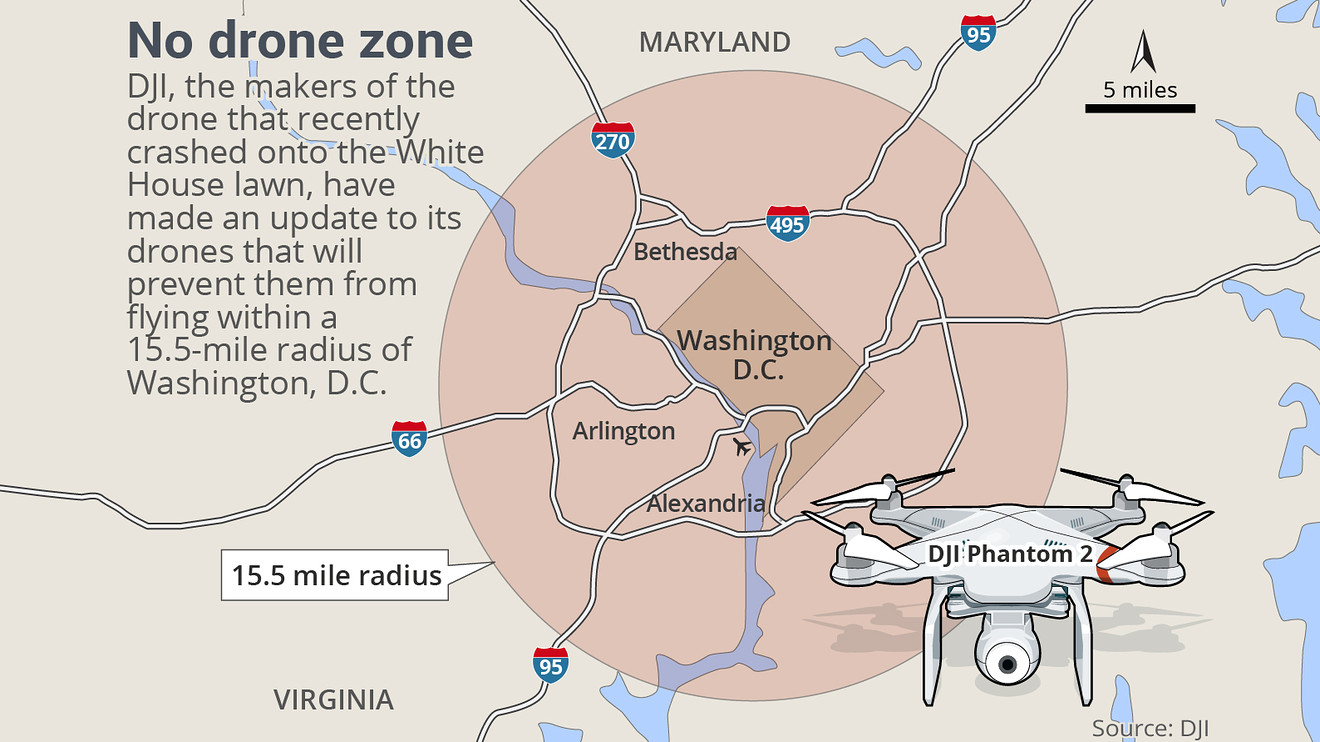 2. Every trip must have a government purpose

To fly a drone within the 7-mile radius, you need special government approval. All drone work inside this radius must be on behalf of a government agency or endorsed by a government agency (local, state, or federal level). Due to this fact, it’s functionally not possible for a purely commercial drone flight to be approved without permission.

3. Every trip has its own permission

Permissions to fly drones are specifically allocated to a drone, a pilot, a date, and a location. That means if your project requires multiple drone flights or uses multiple drones, each instance will need to go through an application and permission approval process. There is no long-term, blanket project permission available.

Need a minimum of 2 people

Considerations for flying a drone in DC

If you have a government project (or a commercial project with government portions) and want to fly a drone in DC airspace, here’s what you need to know:

REQUIREMENT: Police escort. Once you have permission, you will need a police escort for the drone flight itself. That usually costs around $300: the officer costs $100 per hour and typically requires a 3 hour minimum.

You’ll then have a multi-page list of requirements for pre- and during-flight operations (including things like a police escort).

Making DC work with drones is a long shot

It’s worth noting that even if you follow all these items perfectly, it’s unfortunately still a long shot to get a license to fly within the no drone zone (or even in the general DC area). Given DC’s global importance, it’s a highly secure region of the world. That unfortunately makes it harder for innovators to use drones for legitimate purposes. If you’re working on a project that requires aerial images of DC airspace, there is a way to get government sponsorship and permission to fly a drone. It’s lengthy, but possible. Working with an organization like Hover can help streamline the process as well, but there are no guarantees. Sometimes, it’s just not going to happen.